The University of Macau (UM) Faculty of Science and Technology, the UM State Key Lab of Internet of Things for Smart City, and the Macao Convention and Exhibition Association, have successfully assisted Macao in obtaining the right to host the three most influential international conferences in the areas of big data and artificial intelligence, namely the Institute of Electrical and Electronics Engineers International Conference on Data Engineering 2019 (ICDE 2019), the Pacific-Asia Conference on Knowledge Discovery and Data Mining 2019 (PAKDD 2019), and the International Joint Conference on Artificial Intelligence 2019 (IJCAI 2019).

ICDE is one of the most influential conferences in the field of big data. Held in Macao from 8 April to 11 April, this year’s event attracted about 600 representatives from academia and industry from around the world. The other two conferences, namely PAKDD 2019 and IJCAI 2019, will be held in Macao from 14 April to 17 April, and from 10 August and 16 August, respectively. The latter event is expected to attract between 3,000 and 5,000 participants.

Lionel Ni, vice rector (academic affairs) of UM and chair professor in the Department of Computer and Information Science, says that Macao would not have been able to obtain the right to host these events without the support of the Macao SAR government and various sectors of society. He adds that the right to host these conferences is testament to the increasing quality of scientific research in Macao. Additionally, more and more papers written by UM scholars on big data and artificial intelligence have been accepted by international conferences. 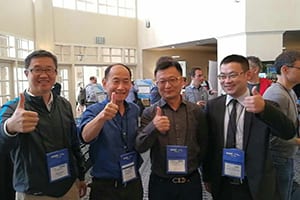